A former English teacher and bookseller, I now work as a self-employed gardener (National Certificate in Horticulture) and write poetry, plays and essays. My writing credits can be viewed here. I have had two poetry books and two poetry pamphlets published by various publishers. I was a co-translator of Alain-Fournier:Poems (Carcanet). I commissioned and edited Four American Poets (The High Window Press) and was a co-editor at The High Window (2016-2018). My essays can be read at the Fortnightly Review. I enjoy cycling, fell-running, sea swimming, dog-walking, jazz, travel, reading, horticulture and garden design. 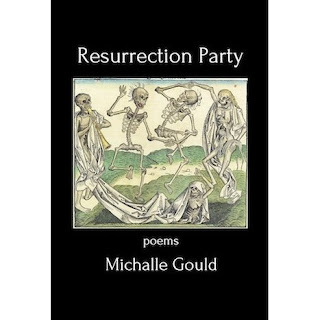 On the front cover of Resurrection Party there is a detail from Michael Wolgemut's 'Danse Macabre' and the poems within are illustrated with six plates of skeletons in various states of wild relief at being alive, or resurrected. When I chose to review this book (based on the title and cover art alone) I expected something dark, ghoulish and harrowing; drawn, despite my scaredy-cat everyday existence, to the subconscious, the bad dream, the other, the bad spirit...in a word, the 'macabre'. How relieved I was to find that the book was less macabre than I had anticipated; relieved, but not disappointed as Michalle Gould's book is much deeper, philosophical, truthful and profound for avoiding the macabre route into the readers' imagination. But then, why the title? I hope I am not being pedantic, but there is neither a party atmosphere, nor a wholesale interest in the theme of resurrection. Perhaps the title stuck after the author published a chapbook in 2007 with the same title. This book is more about metamorphosis, transmogrification, transmigration or metempsychosis and more fascinating for it.

Resurrection Party begins with the reality of death in 'How Not to Need Resurrection' where "children like to play at death/they hold their breath/and cross their arms and shut their eyes". As Wordsworth felt the child was the father of the man because of the child's effortless insight into things, Gould has children as "the first resurrectionists" as they know "that once you believe in death, you must surely die". But this is about as morbid as it gets until we reach the end of the the book in part six and the wonderfully ghoulish and exquisitely titled 'Self-Portrait as an Ampoule of Martyr's Blood Buried with Them in Their Tomb' where

"Any heart is an ampoule of blood
Entombed inside a human body,
A vial, a closed coffin made of glass.
To open us, you must snap our necks"


What comes between the beginning and end of this 74-page book is a variety of experiences of transfiguration and, perhaps, even a sub-conscious yearning for some kind of conversion, a turning toward, in the latin sense, a belief system that can make sense of the challenges of being mortal. These transfigurative experiences occur at the philosophical level (there are poems about absolution and revelation, what it means to be alive and a poem titled 'Hamlet'), the physical level (there are poems about chastity, and wild things and landscapes full of wild animals), and the aesthetic (there are poems about museums and rare books and paintings and seven poems that begin with 'Self-Portrait...').

The self-portraits are interesting for their shifting perspectives. In 'Self-Portrait as a Rare Book Exhibited in a Museum in England' the narrator is the eponymous rare book, owned by a mysterious 'He', at his home dwelling "...on a shelf in his own library/where only his hand could open me", in 'Self-Portrait as a Series of Preparatory Studies for a Nude by Matisse' the narrator is the model telling us "the artist scrapes my flesh on to his brush/but cannot touch what lies beneath". In another lovers are depicted as hungry birds, in another the narrator is a feminised Rapunzel. These self-portraits are a way of interpreting different experiences of the same world, and when the world is not enough the world of myth from Medusa to the Minotaur.

"My bed is warm tonight.
And spare. A length of wood.
A mat of grass. And hair.
Some animal is bare,
Tonight, under my bed.
Its fur embraces my Body.
I arch my back And sigh.
It licks its lips.
The skin slips off my toes.
Tonight, are you hungry?
Nibble away, oh monster.
My dreams await. meet me there"


There are more erotic shocks of physical pleasure in other poems where the notion of a sexual other being part human, part animal: "a chill creeps through my open window/life a thief, to pick my pocket/leaving a trail of wet behind it". Yet these physical moment of wonder are often dreamlike and imagined, and no matter how many times the narrator in these poems tries to attach her self to the physical... "I was the dune"..." I was the Mississippi"..."I was the lake", it is to the heavens, and the ethereal and the need to transform oneself in order to understand or reach a spiritual realm that this book is concerned with.

Gould has angels discussing Michaelangelo's 'Creation of Adam' questioning "Who is the master of this landscape?" And concludes the man is "but the mere image of a man". Angels in 'We were never angels' question whether they were ever angels ("we just looked the part. Taller. Bigger. Stronger"). Doubt prevails, heaven itself an egg "lying broken in half there" ('Revelation by Fire).The Fall is visceral in 'When I Fell to Earth'..."a chewed up piece of planet"..."a damaged star"..."a meteor"; in 'Signs' Gould poignantly ends the poem with the line "perhaps the end is already here".

However, there is acceptance, pantheistic at first with the narrator's identification with the physical phenomena of the earth, and then spiritual, a spirituality that has its source in the recurring motifs of love and longing. "And each time I fell, I wept, I said my God..." ('When I Fell to Earth'). Skies will fall but they will be born again. There is ultimately an identification with a creator in the moving and questioning poem 'Untitled', the subtle undercurrent of homilies for homecoming in other poems like 'On the Potential Appearance of Ressurection' and a poem called 'Spring Awakening'.

Some of the poems in in part four like 'Rectangle' and 'Square' detract from, and are an intellectual detour from, the book's main message, how human beings are a part of a whole which by its very nature is difficult to comprehend or tangibly locate. Gould sums up this dilemma brilliantly in 'Dirge for a Dinosaur by its Bones':

"Longing impresses itself
Into the form of the world
That surrounds it; replicating
Itself physically, in the image
Of the objects found nearest it.
We are haunted not by a ghost,
But its corporal incarnation,
As a wound sometimes reminds us
By its shape of the very instrument
Of its creation. As, yesterday,
During installation at the museum,
Our shadow grew up on the wall,
Until we seem for a moment to be
(Reassembled at last after such long separation)
Joined once more to that same flesh
Which failed to prevent our extinction"


A powerful poem that somehow manages to exist at a viable point between Plato's Cave and Holy Communion. Despite a reasonably steady dose of glass coffins and amputated arms Resurrection Party is always looking for a way out of the dark premise, the claustrophobic impasse. There is more air than dark, more beautiful poetry than negatively spiralling enquiry.

I am particulary pleased to see that Michalle Gould didn't overuse metaphor in the course of her endeavour, which would have been forgivable given the subject matter. Many critics and poets feel that metaphor recreates the world. It can, but overuse can render poetry a cliche. Here, metaphors just running the length of a phrase or a line suffice, like "snow is a country doctor" or "leaves as hands" in 'New England Boarding School:Winter' and 'Signs', respectively.

These are accomplished poems in a range of forms - free verse, rhyming quatrains, couplets - full of intelligence and lyricism. Don't be put of by the surname Gould (a weak pun on ghoul I have avoided so far) as this collection shows Michalle to be a sensitive soul, even sensitive to the plight of clouds:

"Tonight, the clouds
Are tired of flying
Above the earth

Like hostages,
Suspended by chains
They long for rest

They long for the day
When the ground
Will accept them

They will sleep
On its surface
In pools of puddled white

In their place
The heavens will be strewn
With lawns of grass
('Tonight, the clouds')" 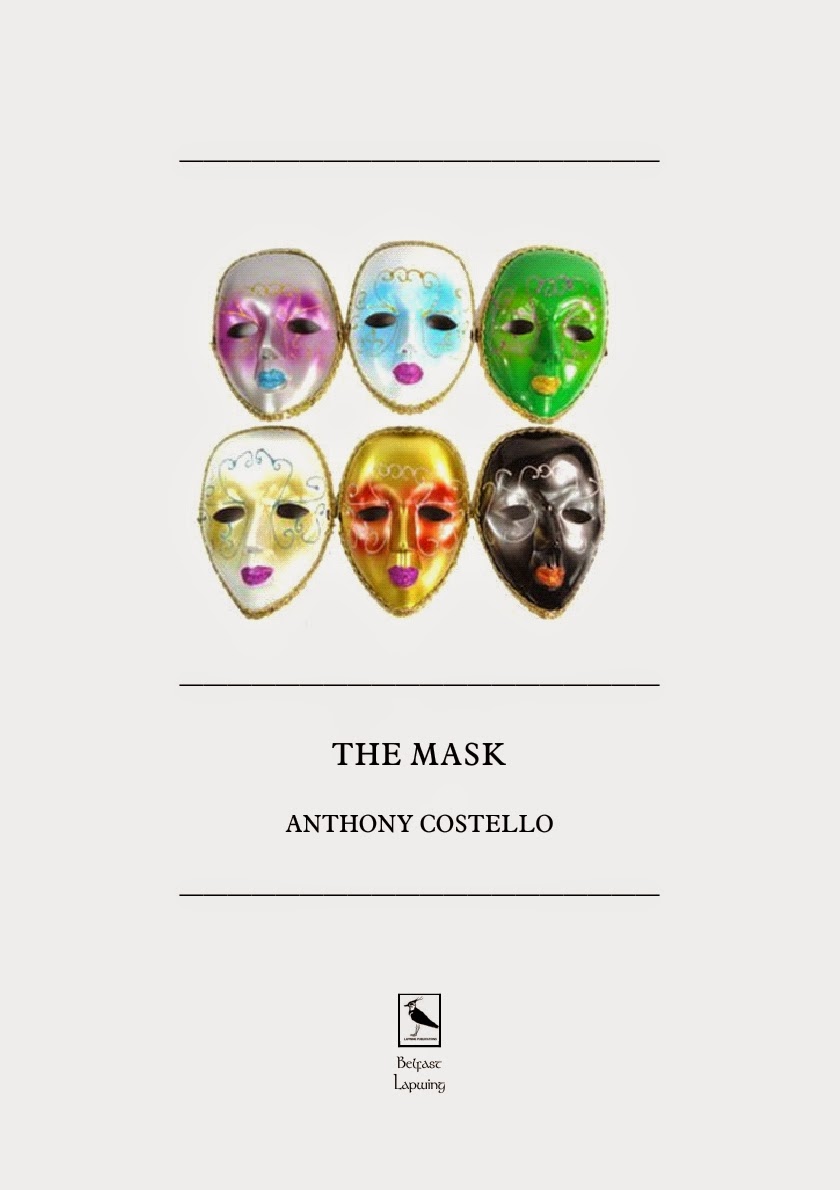